The origin of the Finnish Spitz is undocumented, but dogs of the same type have been used for game hunting of all kinds in Finland for hundreds of years.

It’s believed that Spitz-type dogs were brought from central Russia by tribes of Finno-Ugrian people who migrated into Finland a couple of thousand years ago. They used the dogs primarily as all-purpose hunting dogs. Because they were so isolated, the Finnish Spitz breed developed with little influence from other breeds.

Then something wonderful happened. Two men from Helsinki, named Hugo Sandberg and Hugo Roos, were on a hunting trip in the northern forests and saw some Finnish Spitz hunting. They realized the significance of these dogs and made it their mission to save the breed.

Hugo Sandberg wrote an article for an 1890 edition of the Sporten magazine about the dogs he’d seen. His description was so complete and carefully worded that in 1892, when the Finnish Kennel Club recognized the breed, the first Breed Standard was based his article. Sandberg judged at the first Helsinki dog show in1891. The breed was given the name Finnish Spitz in 1897.

Hugo Roos played his part in preserving the breed by actively breeding Finnish Spitz for 30 years. He showed and judged longer than that. He is credited with gathering the foundation dogs and pioneering the breed until the 1920s.

In 1920, England’s Sir Edward Chichester was so enchanted by the breed while on a hunting trip to Finland, he brought a brace of them back to England with him. Later, he imported an unrelated stud dog.

A few years later, Lady Kitty Ritson, of Tulchan Kennels, also saw the breed in Finland and fell in love with it. Along with several other fanciers, she organized the Finnish Spitz Club in England, which was first registered with the England’s Kennel Club in 1934. She also imported many dogs and was the first to give them the affectionate nickname Finkie.

World War II was a difficult time for the breed, as it was for many others. After the war, the quality of the dogs being shown was very poor. Two dogs imported to England from Finland, Mountjay Peter, and Kiho Seivi, and one imported from Sweden, Friedstahills Saila, improved the breed dramatically in England.

In 1959, two pups were born while in quarantine in England. They were named Tophunter Tommi and Tophunter Turre. These two dogs appeared in almost every pedigree of England’s top winning Finnish Spitz until the early 1970s.

In recent years, a bitch named Irheilu Penan Pipsa of Toveri has had the greatest influence on the breed in England. She appears in the pedigree of nearly every top-winning Finnish Spitz in England and is the all-time top brood bitch in the breed there.

Finnish Spitz were first imported to the U.S. from England in 1959 by Cullabine Rudolph. In the 1960s, Henry Davidson of Minnesota and Alex Hassel of Connecticut began breeding imported Finnish Spitz.

Today, the breed is well-established in Finland and Sweden, but it remains relatively uncommon in the U.S., ranking 147th among the 155 breeds and varieties registered by the AKC. Nearly 2,000 Finnish Spitz are registered annually with the Finnish Kennel Club compared with a total of 637 between 1890 and 1930. The Finnish Spitz has been the national dog of Finland since 1979, and is even mentioned in Finnish patriotic songs. 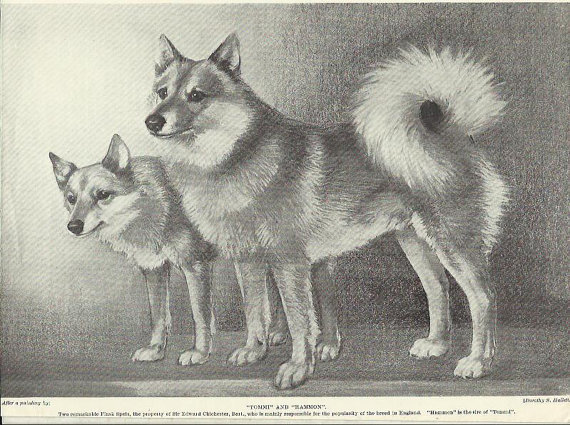